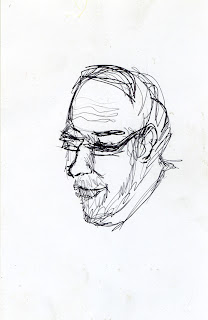 1: something of no lasting significance —usually used in plural;

2 ephemera plural : paper items (as posters, broadsides, and tickets) that were originally meant to be discarded after use but have since become collectibles.[1]


I’m sitting at Baked, a cafe in Whitehorse, pondering a rack card I found yesterday.  The card is a promotion for “Brave New Word” a night of spoken word slash jam taking place at Baked on June 26, Tuesday.  On the back is a pen and ink portrait, neck and shoulder.  This particular card was slotted back in with the rest of the rack cards.  I happened upon it.  It is a spot of creativity left to be found or not, left for consideration or not.


The portrait is of a bearded man, balding, hair swept from the left over to the right, reading glasses on, looking down, I imagine at a book or magazine.  If the artist sat at the table at which I found the portrait, the subject of her attention likely sat at the window.  Here is a moment transcribed for which I was not in attendance.  The moment could be from the morning of the day that I found the card, June 19th.  After a slow start to the day, I arrived at Baked in the afternoon.  The previous day I had flown in late on an Air North Hawker HS7 from Dawson City.  Or perhaps the artist’s pen was active some time on the weekend or earlier, days passing before my absent minded hands turned to the promotional material.  How many others registered the pen and ink drawing, if any?  What did they make of it?


Did the artist intentionally leave the sketch to be found or was their no intention behind its placement? Was it swept up by a Baked employee, cleaning tables, and reinserted into the card stand?  Was it a matter of exercise, a doodle to pass the time?


As archivists our role is to preserve the documentary heritage of society in its various forms.  We preserve social memory, the evidence of interactions between individuals, groups, communities and their ancillary social structures, governments, corporations, non-governmental organizations, religious bodies and so forth.  The approach to this duty may be utilitarian, pragmatic, or inspired.  In Haruki Murakami’s Hard-Boiled Wonderland and the End of the World,[2] a post-modern work that slides back and forth between two surreal narratives, memory/dream is key to identity. In a mysterious walled town at the End of the World, the inhabitants are separated from their memories/dreams, which are stored in the skulls of unicorns in the library.  Outside the walled city are living unicorns, golden fleeced sheep with a single horn.  The inhabitants of the town are stripped of identity, as they are stripped of their shadows that live elsewhere.  Yet their dreams are preserved in the library. What value remains of the memories once stripped from the living?  Are we complete in absence of our histories, the societal shadows we cast?  Is it enough to preserve and for what purpose?


I am in Whitehorse, on June 20, 2012, the summer solstice, writing this missive due to the fortunate circumstance that the Association of Canadian Archivists held its annual conference in Whitehorse some days ago.  I took the opportunity to stay, visit a friend in Dawson City, and experience the solstice in Canada’s north.  The hot sun on my back reminds me that much of my stay has been cool with the sprinkling of rain.  Today is much the same with the exception of the current break in the clouds.  My experience of Dawson was warm both in terms of weather and in terms of my visit with a friend I had not seen in 10 years.  There are those friends you pick up the conversation with as though only a day has passed.  Despite the fairer weather, at one of the barbecues that I attended the gathered revelers made haste to huddle together under the tarp protecting the food as the clouds let loose a torrent of rain.  The down pour was short, our spirits endured as did the fire.  This memory will grow in strength as the years pass.  Memory is a funny thing it is neither fixed nor determinant. It is interpretive.


At the aforementioned conference I presented a paper on the future of photography as a social media. Much of the paper concerned the role that photography is playing as a shared media and the implications for the long term preservation of such records.  As digital cameras replaced film cameras, smart phones, with their capacity to edit, manipulate and upload a photograph immediately after being taken, are quickly dominating the point and shoot camera market.  Applications, such as, Instagram, provide the means to immediately share among friends a stylized image with descriptive information and geotagging.  These images are of low resolution quality, designed to be shared and distributed not to be preserved and reflected upon many years down the road. One of the many questions that arise when considering photography and social media technologies, “Are shared photographs ephemera?  Here today, gone tomorrow.” If the creators create these records as a product of social interchange and dialogue without any intent to preserve why should archivists be so flummoxed over their impending loss to history?


So here I sit writing, thinking, about this little sketch I found of a man I know nothing about.  The archivist in me wants a name, wants a date of creation and wants a creator.  However, in this case the context is not the provenance of the creator but the experience of the viewer.  It is where I found the card with the sketch on the back, my response to it.  It is an experience that will shape my memories of Whitehorse, of Baked Cafe.  It is my imagination, the margins I fill and shape of the moment that the artist looked across and began to draw.  It is the thoughts that flow out of my encounter with a little portrait left behind, most probably destined for the garbage most improbably found by me.


When I visit a new place I like to have the opportunity to stay awhile, to get to know the place through the regular patterns I begin to form through my own habits.  I find a breakfast place and stick to it, here it is Burnt Toast.  I find the coffeehouse that is the local watering hole, here it is Baked.  For dinner I explore and sample the variations.  There is a building up of a pattern of experiential memory.  From here I wish to become familiar with the landscape as a whole and I take pictures.  I cannot take the whole so I take fragments, picture taking.  With digital photography those fragments are many.  I have taken perhaps 350 photographs.  I cull and will further cull these photographs down to those of artistic or emotional merit.  I have a desire to both preserve and create meaning.  Yet, they remain fragments and if they were to be preserved for posterity in an archives the photographs would not reflect a Whitehorse that was but a Whitehorse as I perceived.  The experience is my own, an experience I may wish to share with friends through emails, on Facebook, on the phone or in person.  The experience is ephemeral, unlikely to be preserved.  At best a researcher in the future may draw upon a photographic narrative to intuit the experience.


Memories are what they are; they take you places – unintended places.  My intention for today was to be outdoors enjoying the summer solstice.  To enjoy whatever sun the goddess intends to make available and it is indeed a beautiful day.  The break in the clouds has remained.  Yet, I write about a pen and ink sketch that caught my eye.  As Roland Barthes would say the image has a punctum that reaches me.[3]  My visit with an old friend, Meg, has also led my mind deeper into memory.  I think of my friend Lawrence who was both a source of knowledge and a source of darkness.  He lived life and fought life.  He lived on his own terms but in the process alienated everyone.  In 2008, an article came out in the Quill and Quire about Lawrence Ytzhak Braithwaite.[4]  Lawrence had finally finished the job, he had killed himself.  In death Lawrence had earned the respect of the Canadian literary community, something he could never do in life.  The Quill and Quire article reflected on the anachronism of an author who sought recognition through his subversive novels; which attacked language itself as he wrote about a subculture of street youth, homosexuality, drugs and violence; and saw conspirators the moment recognition was given by his friends or by a publishing house.  There was nothing pretty about Lawrence’s stories but he saw beauty in the dark.  I found little fault in the article passed on to me by a friend, yet there was so much missing.  The back story to what made Lawrence ticked as I saw it.  It was not as though this was the first time Lawrence had made an attempt at suicide.  I was at one too many of those moments and one would have been too many.  My time with Lawrence was not only as a literary compadre but as confidante and friend, as mentee to his mentorship.  Yet this experience is unwritten, undocumented.  It has been four years since Lawrence died and I have not been able to put pen to paper.  Further to this I do not know if Lawrence would approve.


Much of Lawrence’s life was ephemeral.  There was his writing, his computer, minimal furniture, a TV, a mattress on the floor and the hard core music paraphernalia, Spawn figurines and other comic collectibles.  Books would litter the apartment, from Plato, Rimbaud to skinhead treatises (most checked out from the Library).  Did I mention that Lawrence was a Black Skinhead?  Not that this would come close to accurately portraying Lawrence.  Mostly though Lawrence was defined by his immutable presence.  Even at the poetry readings he had been banned from.  Lawrence lived in a largely undocumented world of late nights, bars, bath houses, drugs and brutality.  One night Lawrence went home with the wrong guy.  This particular fellow had called his friend, who arrived later, and together they beat Lawrence to an unrecognizable shadow of himself.


What in the records of Lawrence military service would allude to the life he would lead after leaving the service?  What in these records would document the reason Lawrence left the service?  Or tell of a friend who returned his uniform as he would not himself step again on base?


Here I leave out so much and here I wonder what binds this discourse but the meandering of memory sparked by a sketch of a man reading in a cafe, hair swept over his crown, conscious of his growing baldness.  My account of Lawrence Ytzhak Braithwaite is yet another fragment.  I am not yet ready to write a complete account nor is it appropriate here.  The full story may never come to pass.  The experience persists.


If archivists had the means to preserve all that was documented, all that was recorded, we would still lack the whole picture.  It is our experiences that make meaning out of the fragments.  Despite this archivists persist at their task to preserve those recorded fragments of experience so that we may puzzle together a social memory. Collaborate together on the meaning making by taking stalk of our individual experiences.


The little sketch found on a coffee house table is much more than a disposable moment; it provides the opportunity for me to experience a moment to which I was not in attendance. And have cause to reflect on the human condition, weighing the thoughts that grow from this chance encounter against my experiences over the course of my time in the Yukon and memories triggered further afield.

Photo of the week